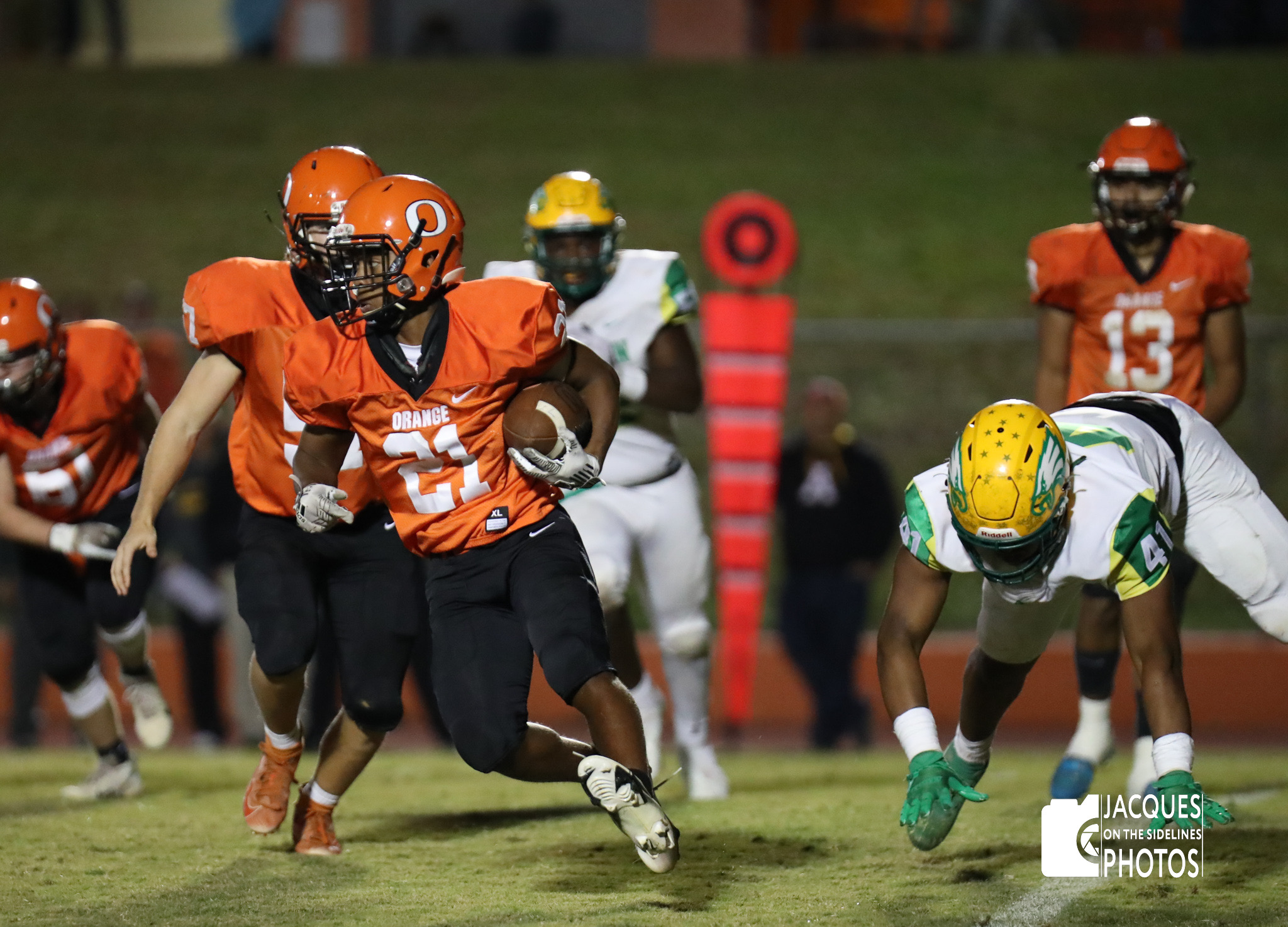 Six years ago, a regular season matchup between Orange and Eastern Alamance would have led to an overflow crowd at Auman Stadium in Hillsborough.

Somehow, two schools separated by 13 miles never could find the time to play a regular season game when the talent levels were comparable. The best they could muster were annual August scrimmages the week before the season started, and even those drew strong gates in Hillsborough and Mebane.

On Friday night, things were different. In terms of talent level, Orange and Eastern Alamance shared the same league in name only, and the Panthers knew it. Eastern Alamance (8-1) went into the game with a share of the Central Carolina Conference championship already in the bag. Orange was 2-7 and had been held below 150 yards total offense seven times through a difficult season.

There were no less than five onside kick attempts. Orange played in the the Emory & Henry formation, where seven offensive lineman gather on the right hashmark while the quarterback, a long snapper and a running back, gathered on the other side of the field.

And they did this for a full quarter.

Of course, Orange could run more gimmick plays than an uber annoying Madden ’21 player and still not change the end result. Eastern Alamance convincingly won 48-27 in front of a huge crowd at Auman Stadium. The Eagles officially clinched the Central Carolina Conference outright with its eighth straight victory. They will likely be the #1 seed in the 3A Eastern region when the state playoff brackets are unveiled today.

Eagles senior quarterback Hunter Douglas, who left the game late in the second quarter to avoid any injury risk, factored in on five touchdowns. He threw for four and ran for another.

Yet the game couldn’t have started any better for Orange (2-8, 1-4 in the CCC). Junior Wynston Brown bobbled the opening kickoff, then sprinted up field for an 88-yard return for a touchdown. It was Orange’s only special teams touchdown of the year.

If that wasn’t enough, junior linebacker Jake Wimsatt picked off a Douglas pass on the Eagles opening possession. Orange caught Eastern off balance in its unorthodox formation, which allowed quarterback Jared Weaver to throw a 59-yard pass to sophomore Nate Sorrells. Weaver found Wimsatt in the end zone on the next play. In the opening three minutes, Orange had nearly doubled its scoring output (13) from the previous two games combined (7).

“That was a fun of a first quarter as we’ve had in a long, long time,” Smith said. “I just thoroughly enjoyed it. But the end of the first quarter, we were behind. But we were just having fun.

It was the first time that an opposing team had scored on Eastern Alamance in nine quarters.

“In most games we played, we were outgunned and outmatched,” Smith said. “But they never had any quit in them. We had some wrinkles that we threw at them tonight. I figured ‘What the heck? What do we have to lose?’ We created some fun and had some energy at practice this week.”

The energy that Orange built was palpable early, but it also disappeared faster than Space Jam 2. Orange didn’t get another first down on its final nine series of the first half. Eastern proceeded to reel off 42 consecutive points. It started when Douglas found Antoine Pugh on a 47-yard gain for the first of many Eastern trips to the Orange red zone. Triston Keck caught the opening Eagle touchdown pass from Douglas. It was Keck’s third touchdown of the year.

The Eagles took the lead for good on its next drive when Douglas hit Ce’Darian Williams for a 56-yard touchdown pass on a one-play drive. Karsyn Johnson’s extra point put the Eagles ahead 14-13.

The Emory and Henry well had run dry for Orange by this point, and Eastern started its next drive at the Panther 38-yard line. After the Panthers were called for pass interference, Eastern’s leading rusher Joshua Murray had a 13-yard run, which was his final play of the night. Douglas scored on a 4-yard keeper up the middle, his third rushing touchdown of the year.

Late in a first quarter that took 47 minutes to play, Eastern linebacker Joey Teixeira recovered an Orange fumble. Freshman Tyrek Samuel, in his varsity debut, replaced Murray and scored on a two-yard run to give the Eagles a 20-13 lead at the end of the first quarter.

There’s something to be said after going down swinging, which was exactly how each of the 17 Orange seniors played their last game. There was nose guard Kameron Harshaw, who entered the game with a team-high 26 tackles for loss. Harshaw left the game twice after injuries to his left leg, but came back each time and recorded several more tackles for losses in the second half.

Senior quarterback Jared Weaver had his best half of the season in the second half. He had career-highs for completions, attempts passing yardage, total offense and touchdowns. He finished 17-of-25 for 218 yards and three touchdowns.

After Samuel scored the opening touchdown of the second half, Weaver hit sophomore Nate Sorrells for a 38-yard touchdown pass.

Orange’s final touchdown of the season came off a sustained 13-play, 81-yard drive. Weaver hooked up with Sorrells fora 27-yard gain to push the ball into the red zone, then targeted Sorrells again for a 23-yard touchdown.

On the subsequent two-point conversion, fullback Jackson Wood appeared he was going to be stopped short. But Wood, a diehard Virginia Tech fan, showed enough fight and grit that would have made Frank Beamer proud to just get over the goal line and reduce Orange’s deficit to 48-27.

And that was the theme of Orange’s first season in the Central Carolina Conference. On Monday morning, Smith will start with the daunting process of replacing nine starting seniors on defense, as well as his starting quarterback and a leading rusher who left the team at midseason.