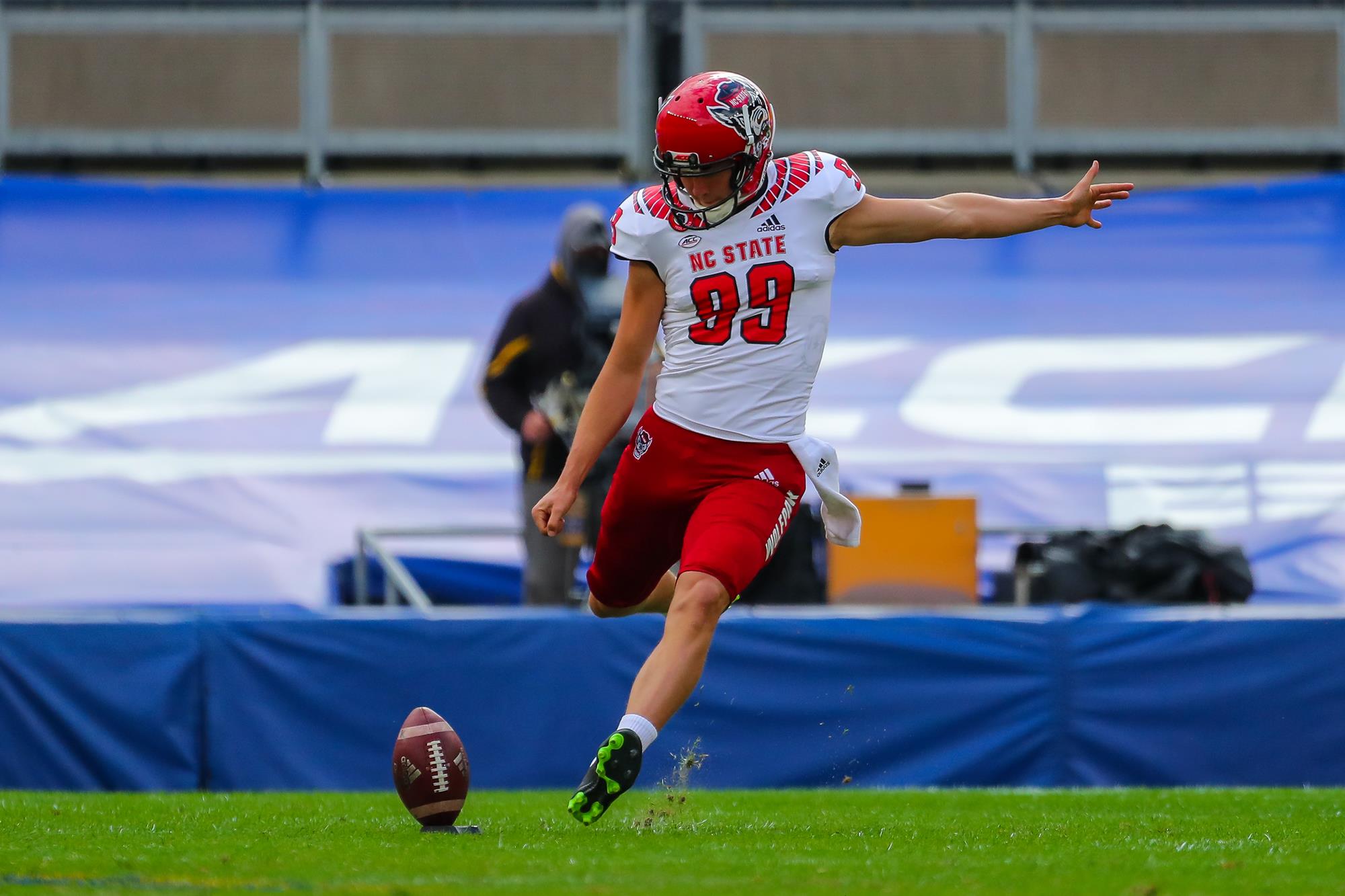 Trenton Gill: #23 N.C. State held on to defeat Louisiana Tech 34-27 at Carter-Finley Stadium in Raleigh on Saturday night. In a tight game, Gill had a vital role as the Wolfpack punter and he came through big. All but one of Gill’s kickoffs reached the end zone. In six punts, Gill averaged 51.2 yards. His longest punt was 57 yards. Two of them were downed inside the 20-yard line. N.C. State is now 4-1 after winning its final nonconfernece game of the season. The Wolfpack will be off next week and will travel to Boston College on October 16. Last week, Gill was named a semifinalist for the Campbell Trophy, which is awarded to the country’s top student-athlete based on academic success, football performance and exemplary community leadership. Recently, Gill helped raise $12,000 in funds for new playground equipment for New Hope Elementary School in Hillsborough, which he attended. Gill graduated in May with a degree in biological sciences and is currently pursuing a postgraduate degree in professional communication.

Adam Chnupa: The Elon Phoenix knocked off #22 Richmond 20-7 at Robins Stadium in Virginia on Saturday. Chnupa, who played football and baseball at Cedar Ridge, played on special teams for Elon. The Phoenix improved to 2-3, 1-1 in the Colonial Athletic Conference. It makes the fifth straight fall season where Elon defeated a ranked opponent. The Phoenix travel to Maine on Saturday.

Keshawn Thompson: The Campbell Fighting Camels defeated North Alabama 48-31 in Braly Stadium in Florence, Alabama on Saturday night. Thompson had three tackles for Campbell, which won its Big South Conference opener. The Camels are 2-2 and will travel to Gardner-Webb next Saturday for the first-ever North Carolina East/West BBQ Trophy. North Carolina BBQ expert Bob Garner will present the trophy to the winning team.

Bailey Lucas: On Saturday, the Meredith volleyball team swept a tri-match at Hanes Gymnasium in Greensboro. The Avenging Angels started the day with a 3-2 win over Greensboro in USA South Athletic Conference action. Meredith won on scores of 20-25, 26-28, 25-11, 25-21 and 15-10. Lucas started for Meredith as setter. She registered 18 assists, and ten digs. In the final match of the day, Meredith defeated Pfeiffer 3-1 on scores of 23-25, 25-16, 25-15 and 25-19. Lucas played all four sets for the Falcons and had two aces. She also finished with 19 assists and five digs. Meredith is in second place in the USA South East division with a 4-1 league record. They’re tied with William Peace for second, and the Angels defeated the Pacers last month. Meredith will face William Peace at Weatherspoon Gymnasium in Raleigh on Tuesday.

Emerson Talley: Last week, Talley played in her second game for the Lenoir-Rhyne women’s soccer team. The Bears routed Coker 5-1 in Hartsville, South Carolina. Talley came off the bench and played 26 minutes. On Saturday, Lenoir-Rhyne shutout Lincoln Memorial 5-0 at Mortez Complex in Hickory. Talley played 33 minutes in the second half. Lenoir-Rhyne leads the South Atlantic Conference with a 4-0 record. The Bears are 6-1-2 overall and travels to North Georgia on Wednesday.

Brittany Daley: On Friday, the Division III Greensboro College women’s soccer team played to a 1-1 tie against Meredith at Pride Field in Greensboro. Daley started at centerback and played 108 out of 110 minutes. On Tuesday, Salem College defeated Greensboro 1-0 in Winston-Salem. Daley played all 90 minutes. Greensboro is 3-5-2 overall, 1-1-1 in the USA South Athletic Conference.