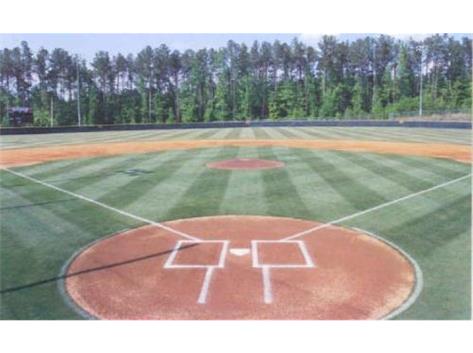 David Waitt wasn’t sure what he had just done. Neither did his coach, Jason Knapp.

“I couldn’t believe what I was seeing,” Knapp said as he watched Waitt’s 1st inning fly ball to left field carry…and carry…and carry until it nearly hit Orange trainer Emily Gaddy’s car parked near the football field house beyond the left field wall.

Waitt, who has garnered an early reputation as a singles and doubles hitter, had his first varsity career home run. A three-run job, no less.

By the end of the night, Orange pounded out 19 hits against a weary Cedar Ridge pitching staff as the Panthers defeated the Red Wolves 19-9 in six innings at a windy Orange High Field on Wednesday night. Orange (3-0) is tied with Northern Durham for first place in the Big 8 Conference.

Obviously, it was a night of offense. Orange’s win couldn’t overshadow the most impressive performance in the career of Cedar Ridge leadoff batter Aidan McAllister, who launched two home runs, each to dead centerfield, in the opening two innings. McAllister scored three times and finished with three RBIs.

“1-through-9, we’re solid,” Knapp said. “It’s as solid as a hitting lineup as I’ve ever had. We have the potential to get the ball over the fence and bust one open.”

Cedar Ridge (1-2), coming off a narrow loss to Chapel Hill on Friday, has drawn the short straw in terms of Big 8 Conference scheduling. Among the six teams in the league that are fielding teams week in and week out (Orange, Cedar, Northern Durham, Northwood, East Chapel Hill and Chapel Hill), the Red Wolves are the only one that haven’t had a forfeit win yet (Southern Durham and Vance County have forfeited all of its games thus far due to a lack of players). After a season-opening triumph at Northwood on April 27, Cedar Ridge has played three games in eight days, the most strenuous stretch for any Big 8 team. Coach Bryson Massey has used pitchers Will Berger and Cristian Macias in all three games.

Not that he wants to hear that.

McAllister opened the night of offense with a solo blast to centerfield on the second pitch thrown by Orange starter Pierson Kenney (who improved to 2-0). After Bryce Clark walked and Garrett Ray was hit by a pitch, Macias reached on a bunt single down the third base line to load the bases. Catcher Tucker Cothran grounded a ball back to Kenney, who threw to catcher Davis Horton at the plate to retire Clark. Third baseman Marco Velazquez knocked in Ray with a sacrifice fly to centerfield to put Cedar Ridge ahead 2-0.

Orange responded with four runs in the 1st inning. Before Waitt’s three-run homer Berini reached on an error and scored off a single by Horton. That lead was short-lived, as well.

After B.J. Thornton reached on a one-out infield single in the top of the second, McAllister belted a 1-1 fastball over the centerfield wall to tie the game.

Orange sent 12 batters to plate in an 8-run 2nd inning. Berini led off with a single to right field, followed by Funk getting aboard on an infield error. Senior Will Walker lined a double down the left field line to bring in Berini. After Horton was intentionally walked, Waitt went opposite way with a soft liner to right field. Walked scored, and Horton slid in safely after the ball popped out of the glove of the catcher in a close play at the plate.

Jaren Sikes lined a RBI single to bring in Waitt. Tyler Lloyd walked, Berini singled and Funk reached on an error, which led to Lloyd and Berini coming in.

The only semblance of consistent defense came when Orange sophomore Joey Pounds entered the game to relieve Kenney in the fourth inning. At one point, Pounds retired seven consecutive Red Wolves, including striking out the side in the fifth inning. It was Pounds’ first varsity save as he riddled Cedar Ridge batters with his unique fastball that looks like a curve but really isn’t.

“It’s all over the place,” Knapp said. “It cuts, it tails. He’s got great movement. I’m awfully proud of him. I put him in a tough spot. He battled through some adversity with a few balks that were called. He pulled himself together and absolutely started dealing for a few innings.”

In the sixth, Clark doubled to left field. Centerfielder Garrett Ray knocked him in with a single.

“These guys compete,” Knapp said. “They work hard in practice. They’re always pushing each other and I was really proud of these guys tonight. They rang the bell and they answered some questions. People in the back were asking some questions about these guys, and they really came out and showed some things.”