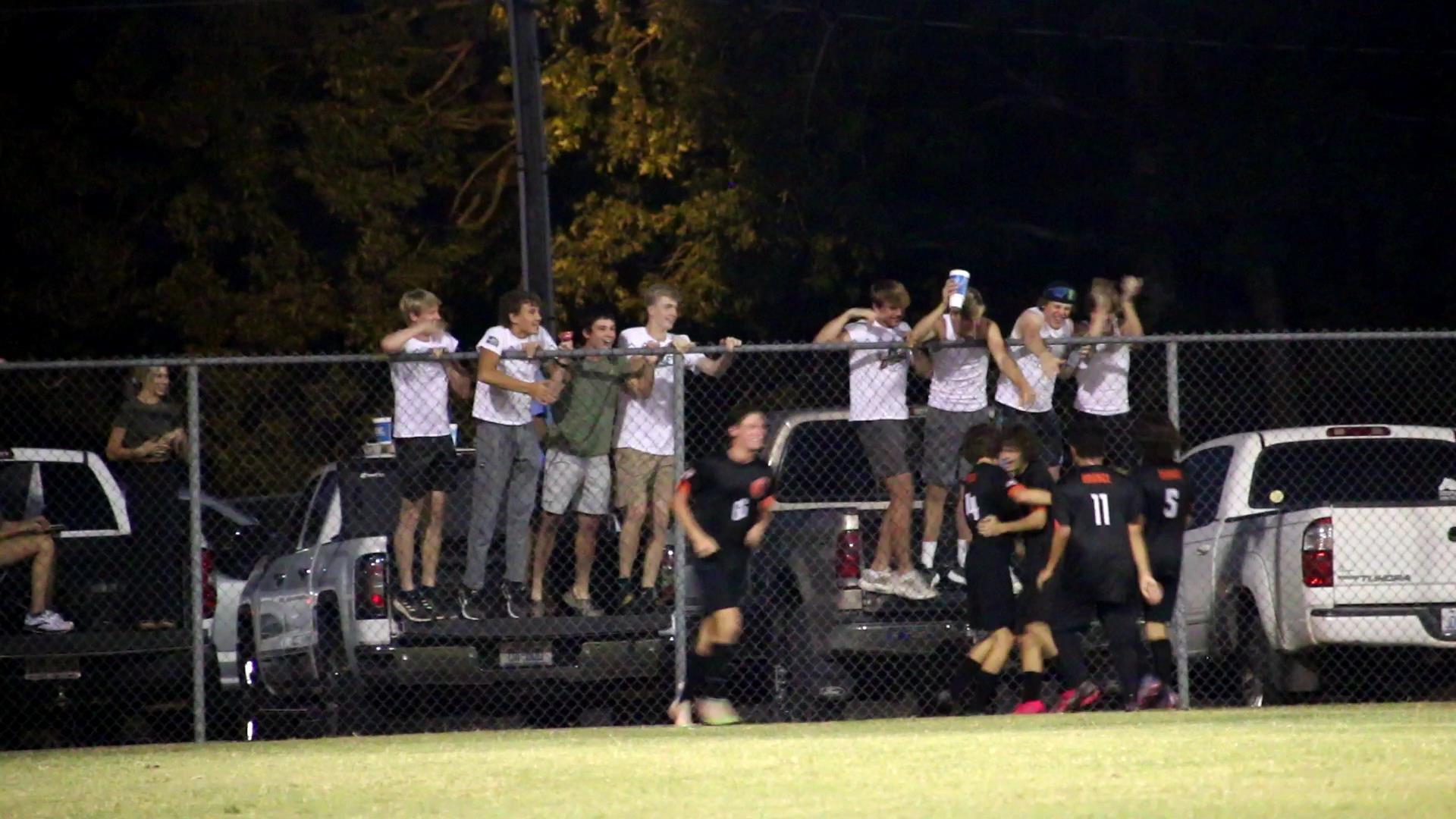 The Orange men’s soccer team will take its longest winning streak in five years into tonight’s match at Eastern Alamance.

In past years, the Panthers probably would have lost its game against Northwood. But not last Wednesday night.

After the Chargers had erased a two-goal lead in the span of 48 seconds, Ryker Stein chipped in a free kick from Cooper Zinn into the upper-left corner of the net with 9:48 remaining. Stein’s goal, his second of the season, would prove to be the game-winner as Orange defeated Northwood 4-3.

Immediately after scoring, Stein rushed over and slapped hands with the Truck Bed Rowdies, Orange’s home cheering section that backs its pickups to the front of the gates along the north end zone and enjoys the games standing on the beds of their trucks.

The Panthers ended a seven-game losing streak to the Chargers. It was Orange’s first win over Northwood since October 9, 2018.

“I think we’ve grown to be a bit more mentally tough since the start of the year,” said Orange coach Palmer Bowman. “I think they just needed some confidence and a couple of breaks. They’ve had that the last few games and they know what they can do. You never like to give up two goals like that but they definitely showed some resolve.”

Orange’s Tyler Mann put the Panthers ahead 3-1 with a line drive from a pass by Enzo Bruhns with 39:04 remaining in the second half. It was Mann’s second goal of the game after he scored the opener in the first half.

Zinn put Orange ahead 2-1 late in the first half with his first goal of the season.

Northwood stormed back with goals from Rui Aguiar and Gabriel Chirino to even the match 3-3 with 14:53 remaining in regulation.

After Stein’s game-winner, the Panther backline of Darius Corbett and Tucker Gaddy made vital plays down the stretch to keep the Chargers from sending the game into overtime. With 6:28 remaining, the Chargers had consecutive corner kicks, the last of which was headed out of danger by Corbett. Gaddy broke up a shot attempt by Chirino from ten yards away with less than four minutes remaining.

Since the win over Northwood, Orange has continued its hot streak with a pair of road victories.

On Friday night, the Panthers defeated Southern Durham, the leaders of the Northern Lakes Conference, 5-3 at Spartans Stadium. Orange goalkeeper Connor McMurtry had some huge saves down the stretch as the Panthers preserved its lead.

Mann, who had goals in all three of Orange’s games last week, scored two goals for Orange. Zinn added another. Murilo Lopes tallied his first goal of the season. Bryan Membreno added another goal for Orange off an assist from Ivan Guzman Ruiz. Dylan Silverman and Bruhns added assists for Orange.

On Monday night, the Panthers traveled to Graham for the second straight year and defeated the Red Devils 3-0. Travel Bruhns scored the game-winning goal for the Panthers. Zinn added another for his third goal in three games. Membreno added a goal and also assisted on Zinn’s insurance marker. McMurtry earned the win in net. Backup netminder Finn Kelly was inserted into the game with 25:00 remaining and finished out the win.

Orange (6-5, 3-1 in the Central Carolina Conference) is tied with Western Alamance for second place in the CCC. Walter Williams, the #1 ranked team in 3A East, sits atop the league at 4-0. The Bulldogs are 11-0-1 overall.

The Panthers are currently ranked #23 in the MaxPreps 3A East standings. 32 teams make the 3A State Playoffs from the Eastern Region. Orange’s last trip to the 3A State Playoffs came in 2017. Jamar Davis, now a long jumper at N.C. State, led the Panthers in scoring. Orange defeated White Oak 6-2 in overtime (yes, in overtime) to win in the opening round of the state playoffs. In the second round on a rainy Saturday night in Greensboro, Orange led Northern Guilford 2-1 in the second half before the Nighthawks rallied and won 3-2 in overtime.